Harumi is a limited character from Tokyo. She is a rather shy person, as she doesn't talk that much. She makes her Subway Surfers Kart debut in the game of the same name, but she skips two games to make her next appearance in Subway Surfers Kart: Double Trouble!!. After skipping Subway Surfers Kart DS, she has appeared in every game since Subway Surfers Kart Wii. In the Subway Surfers X Dolls Kill collab, Harumi wears a pink Tokidoki X Hello Kitty Hello Dreamy Graphic Tee, a Back in The Day Dungarees overalls, a pair of Astro Advantage Knee High Socks, a pear of Neon Pink Corin Platform Sneakers, Colorful Cutie Multi Hair Ties Set on her wrist, and Furever Famous Hair Clips on her pigtails. Harumi along with Mina are the only surfers to wear a bunch of Juku Store fashion for the Subway Surfers X Juku Store collab.

Harumi along with Mina in Anime Summer Twins on Rinmaru Games

Harumi in Kawaii Fashion Dress Up Game on Rinmaru Games

Harumi in Kitty Idol Dress Up Game on Rinmaru Games

Harumi dress as Nyannyancosplay aka the Hit or Miss Girl 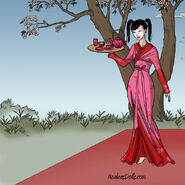 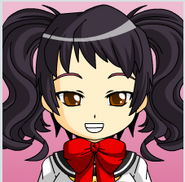 Harumi in Anime Face Maker
Add a photo to this gallery
Retrieved from "https://subway-surfers-fanon.fandom.com/wiki/Harumi?oldid=11616"
Community content is available under CC-BY-SA unless otherwise noted.