Jake is one of the main characters of the game Subway Surfers.

Jake is a light-skinned boy with a light-blue denim vest, a white hoodie sweatshirt with a red shirt underneath. He also wears a red cap with "Sub Surf" on it, with green and red shoes and light-blue jeans.

During the Miami 2013 update, two outfits, the Dark Outfit and the Star Outfit were given out for players to buy and wear.

Jake's Dark outfit is an in-game freebie that is similar to his default outfit, as it is only a dark-themed recolouring. His jacket is dark blue, the hoodie is dark-grey with white stripes on the arms, and the white portion of his hat is black. His shoes get black and red and he wears dark blue trousers and sunglasses, along with dark fingerless gloves.

It was introduced in the  update and costing 30 (but actually costs  150). Most of his clothing (hoodie, trousers and shoes) are red and light brown. Notable changes are his golden headphones, star chain necklace and wristwatch.

Jake along with Tricky in Manga Cover Creator on Rinmaru Games 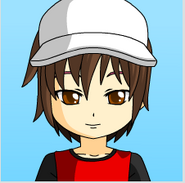