When the Subway Surfers X Dolls Kill collab went to a major flop due to Shoddy Lynn shooting at protesters, Peachycream has halted the entire collab until a revival is planned. Meanwhile when Subway Surfers X Juku Store became a huge success, she decided to make an official spin-off by finding another Japanese store. She was looking up something on her Instagram, but suddenly bumped into SpreePicky's Instagram page. Peachycream later got the idea by having the Subway Surfers dress up in SpreePicky fashion. But unlike both Juku Store and Dolls Kill, Peachycream decided to all in with packs from different looks similar to amiibo wave packs. She also decided to add in not just Harumi and Mina, but also Jia, Brandon, Rin, Mimi, and Maeko. Some of the clothing from the original Juku Store is also on the SpreePicky website. 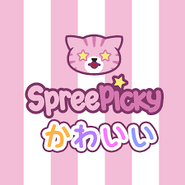 Add a photo to this gallery

Retrieved from "https://subway-surfers-fanon.fandom.com/wiki/Subway_Surfers_X_SpreePicky?oldid=10769"
Community content is available under CC-BY-SA unless otherwise noted.